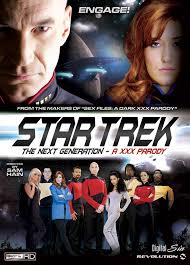 And this week, Star Trek! And not just any Star Trek! Next Generation, baby! Holy hell I’m ready for this one. I grew up on Next Gen and developed some of my first and therefore most deeply engrained sexual fantasies based on it. For instance, while I’ve never gotten fully into the Sean Connery or Michael Douglas “older-men-are-sexy” boat, Sir Patrick Stewart reeeeally does it for me. That voice! That broad chest! That shining crown of smooth skin! And such authority, such power, such perfect composure, even on strange new planets, seeking out new life, and going where no man had gone before — hopefully the rapidly-moistening wilds of my virginal vagina. And Riker! Whoo, what a hottie! I used to go to bed and nuzzle my teddy bear pretending it was his beard. And I bet, if you took a poll of women who grew up lesbian, queer, or curious, you’d find a high proportion of Next Gen fans; there’s just no way you can take in the bazongas under the sheer fabric of Deanna Troi’s uniform or hear her sultry voice for even one episode without taking an interest in snatch. I bet even straight ladies will admit girl-crushes on her. Now that I’m thinking about it, I don’t think there were really any characters on the Enterprise that I didn’t want to bang back in the day, and now that they’ll all be portrayed by people with bigger boobs and better bodies who want to take their clothes off and play hide-the-fazer, I’m all ears. Let’s see what you’ve got, Federation!

And it’s a shame. The cast is fabulous, minus some abominable goatees (Roccio Reed, weirdly enough, looks like Chris Kattan with a bigger cock when you put a Riker goatee on him, and even the stunning Bobbi Starr has a tough time pulling off that hair). Giles plays a sexed-up version of Jean-Luc Picard, with a slightly less-refined accent and a huge wang. Xander Corvus is just creepy and pale and bad enough at acting to simulate an unconvincing but cute Data. April O’Neil — my god I can’t get enough of her perfect body — is gorgeous as always. Kimberly Kane is actually somehow hotter than the original Dr. Crusher, and even Dane DeArmond’s facial ridges can’t take away from her beauty. Nor can Dana DeArmond’s part-Klingon face ridges as Ensign Ro Caren. But, friends, good intentions, holodeck boning on the bridge of the Starship Enterprise, exceptionally well-made special effects, and weirdly soft, spacey music in the background don’t make a good porno. Nor do good acting or a decent script, thank god, because you’ll find none of that here.

For the love of all that the Federation has done for us, we deserve better!