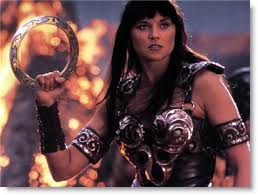 I don’t have time to watch much in the way of TV these days, but I have a friend who recently discovered Xena: Warrior Princess and fell completely in love. She bough herself seasons 1 and 2 on DVD, but when someone gave her the entire series box set, she sent me season 1, confident I would love it. I remember watching a few episodes in high school, and one of my best friends was absolutely obsessed with it, but I was lukewarm. It was fun, definitely entertaining, but totally ridiculous. I took myself pretty seriously back in those days.

So lately I’ve been playing Xena in the background while writing and doing all manner of work. And it’s pretty easy to have on and not pay attention to, if you’re busy. But a few weekends ago I was very sick and couldn’t do any work, so I laid on the couch and watched episode, after episode, after episode. And you know, I kind of fell in love.

Not only is Lucy Lawless completely stunning, and the lack of continuity in accents and historical time period and general… everything… endearing, and the sexual tension between Xena and Gabrielle way fun to ogle at… But Xena: Warrior Princess is awesome in another, more important, way, too. See, the thing about the character Xena is that, yes, she’s totally foxy. But that’s her secondary characteristic. Her first is that she KICKS ASS, and the fact that she beautiful is just an added bonus. That might sound silly, but think about it: how many shows or movies revolving around strong female characters take the strength and ass-kicking more seriously than the sex appeal? How often does a sexy female lead get to be strong first, sexy second? Especially when skimpy armored breastplates and stunningly beautiful eyes are involved? It’s not that it’s unheard of for a female lead to be sexy second, but it’s very rare that her physical prowess is applied to righteous ass-kickery than to the ogling of the audience.

Not that Xena doesn’t use its title character’s sex appeal to attract an audience. Not that Lucy Lawless’s amazing body and stunning beauty aren’t exploited. She’s definitely eye candy. But her character is a lot more than that, no matter how cheesy the acting: the Warrior Princess (who, by the way, from all I can tell, is not actually a princess at all) is a justice-doling machine, a conflicted human being, and a strong woman who doesn’t need a man or a lover to be bad-ass. She doesn’t need to shake her money-maker to get her work done. She’s smart, strong… and sexy. But the smart and the strong come first. How many role models do we have like that for girls these days? We’ve got characters that are smart and strong, sure, but most of them only let their ass-kicking come out after they’ve used their sex appeal to get our attention. But Xena is more than that, whether her acting is Emmy-worthy or not. In fact, the only female character with the same ratio of strong-to-sexy I can recall in recent memory is Evelyn Salt in Salt… and that part was written for a man before Angelina Jolie came in. The truth is that today, most of our female heroes in entertainment are cute first, heroic second. Sexy before smart. Xena is one of the very few who got it right, and kept doing it for years.

So, I just want to send out a little love note here to the Warrior Princess and all her kick-ass kin: you guys rock.