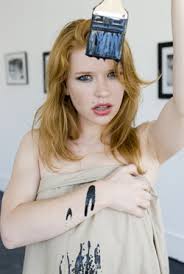 I’ve been trying to figure out how to blog about my afternoon with Madison Young last weekend. It was a week ago today that I went to the art space where she was setting up for her current show, “Building Our Own White Picket Fences,” sat down on the floor with her, and talked for an hour and a half about motherhood, sexual hypocrisy, pornography, art, and consent. And in that week I’ve been replaying our conversation over and over in my head, enjoying it every time. Because Madison and I seem to have each taken half of the same brain—her, the more action-oriented extroverted half, and myself, the more introverted, thinky, writerly half (thought both of us seem to exhibit traits of both halves)—and taken some genetic material and life experience from elsewhere to fill up the rest of our skulls. In the interview, which I filmed, she said everything I’ve always wanted to hear a porn director and performer, artist, and human being say about human sexuality. We were vibing like woah.
But the thing is, since this interview was for use in the art show I’m curating for a spring show at apexart here in New York, I kind of have to keep the details under wraps for now. Not that any of it was groundbreaking or entirely new or would hurt anybody if it were let out of the bag, but I think I need to spend some time thinking about it in my own quiet, private way to see how it fits into the larger ideas I’m working with in my show, before I share with the world.
So let’s get past the details. Let’s say that in San Francisco there is a woman who inspires me. A saucy redhead with pale skin and beautifully clear, blue, penetrating eyes who says what she thinks, does what she says, and lives a life so open and honest that it makes me want to reexamine my tendencies toward secrecy and the way I jealously guard my privacy. Maybe, she makes me think, privacy isn’t all it’s cracked up to be. As an artist she takes her guts and raw emotions, tangles them up and unties them again, and fits them into and around art installations she designs. As a pornographer she unwraps the veils of propriety that society tries to shove onto her body and steps forward boldly, as naked and exposed as a person can be, and revels un-self-consciously in her body and her pleasure. She’s a living tribute to the bravery of the queer movement, the danger and joy in the sex-positive movement, and a personification of the kind of courageous radical living that I wish I knew how to engage in, myself.
I’d always thought that Madison would be this way, but it’s difficult to judge people from afar in some ways. A woman of her intelligence, discerning, business acumen, beauty, and balls could easily have proven aloof, pretentious, unfeeling. She could have been uninterested in our conversation. She might have found my questions simplistic and treated me accordingly. Who knows? Our heroes are often much more intimidating before we’ve met them. But I found Madison to be open, kind, interested in what I had to say, and welcoming in every way. When we hugged to say goodbye I knew it wasn’t a cursory way of saying goodbye, but an acknowledgment of her appreciation for me and I of her. It was just….
Hehehehe, ok I’m geeking out. I’ll give it a rest. But the point is: Madison Young is amazing. As a pornographer, an artist, and a human being, she makes me want to be a better person. Please check out her newest art show for Femina Potens as part of a queer community-building project (which you can donate to on Kickstarter) if you’re in the Bay Area, or check out her writings and films online.