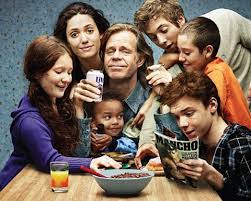 Last night at a friend’s house I watched the first episode of the new William H. Macy Showtime drama, “Shameless.” (Between Macy’s new vehicle and Steve Buscemi’s “Boardwalk Empire” on HBO, this seems to be the year of the weird-looking-dude on major cable channels. I LOVE it! These two guys have been favorites of mine for years and now they’ve both got their own badass vehicles to drive me cuh-razy with their ass-kicking!) I LOVED it. The show takes as its base an incredibly, deeply fucked up family with issues out the wazoo, and treats it with a kind of wiseass love without forgetting to show the cracks in the “we’re having so much fun” veneer. Plus, omg, it’s maybe the first TV show since Roseanne to show a white working class family with problems that most of us would sit around whining about but which the characters take as part and parcel of living a weird but satisfying life. I’m loving it.

The best part, however, was when one brother discovered that his younger brother was gay. After first finding his folder of naked-man jerk-off material and asking him about it to no effect, he snooped around and discovered that his brother was in fact fucking his boss, a local deli owner. Despite his initial disgust/anger at the situation (the boss is married with kids, not to mention years older than the adolescent he’s boning), the older brother is shamed into realizing he’s being judgmental when the younger brother fights back and demands an apology because he’s done nothing wrong. In a really touching scene, the two sit together in the family’s decrepit van, smoking cigarettes they are far too young to have purchased legally.
“But, seriously,” says the older, “up the ass? Do you get used to it? CAN a person get used to that? I mean, the whole point of the digestive system is one-way traffic. It just is.”
The younger brother laughs. “‘It just is,'” he giggles. “Like if God granted us lungs just to smoke with.”

Brotherly bond restored, and poetic point about the joys of butt-sex made. I love this show.