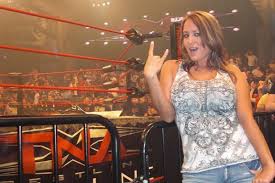 One of WHACK!’s most favorite females in the world, Trina Michaels has been turning her career into a double-whammy of awesome for the past few years. Her steady penetration into the world of professional wrestling got Trina nominated this year for AVN Crossover Star of the Year, and she’s been working her ass off (not literally, don’t worry! And her boobs are still there, too!) to make her career take a jump into more ass-kicking while continuing to do a little ass-licking for the camera.

This weekend, Trina will appear in Atlanta during Wrestlemania, the wrestling world’s biggest event of the year. She’ll be appearing at Dragon Gate with John Moxley on April 2nd and 3rd at the Presidential Ballroom in Atlanta. Trina will be supporting Moxley as he faces off against Arik Cannon in the special challenge match during “Mercury Rising 2011” on Saturday the 2nd and in the Six-Way Freestyle on Sunday the 3rd.

Trina’s looking forward to the fights because she’ll finally have an opportunity to come face to face with her nemesis: the glamour-model-cum-wrestling-wannabe Reby Sky. Trina’s ready to bring it to the ring if she needs to, and she’s hoping she can bait Reby into a fight, from the sounds of it. “My good friend John Moxley has a little problem, and that problem is named Reby Sky,” she says in her promo video (you can watch it below, too). “I mean the truth is, Reby wants to be like me in so many ways, but she just can’t. I think it’s really cute that Reby thinks she’s pretty enough to pose for Playboy… You know, if I’m gonna waste my time taking my clothes off, I’m gonna make sure I’m not just posing. I mean, go hard or go home, right?”

I gave Trina a call to ask her about the match and her enmity with Reby. “She dates one of the Hardy brothers or whatever, so that’s her little ‘in,’” she said. “You know what, I don’t have an in like that. I’ve worked my ass off. I got here with just a smile on my face, pretty much. I could probably knock her out with one boob.” Trina’s not lying: those things are massive. And Trina’s a hard-ass: she’s been pushed off of ladders, thrown through tables, and fought, scratched, and bitten her way into the wrestling world. She’s not going to be shown up by some glamour model, that’s for damn sure.

We don’t know much about the Playboy centerfold or her “ins” into the wrestling community, but we damn well know Trina, her double-Ds, and her abilities in the ring. So we want to wish a very half-hearted “good luck” to Reby. She’ll need it.

Check out the details on Dragon Gate tickets here, or wait a few weeks to find both bouts on pay-per-view!