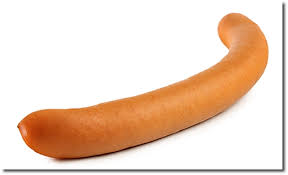 1) You know, as disgusted as I am with the hysteria over Weiner’s wiener/Weinergate crapfest–I mean, seriously, what is the big DEAL, people? It’s not as if the idea that one of our politicians might be a little sleazy in his personal life is anything new to any of us–I have to admit that I’m very glad that the word wiener has now come back into fashion. It’s a sadly underutilized slang term for the male organ, and one that I think was due for a comeback. Hehe. Comeback. And just in time for the big Coney Island Nathan’s International Hot-Dog Eating Contest on the 4th of July, too! Does anyone else find it odd that we can make an international television spectacle out of a man gorging himself on processed meat products and label him a champion, but one guy sends some pictures of his boxer sausage to a few women and we all fly into a frenzy of condemnation? Which of these two events is grosser? …It’s a strange world we live in.