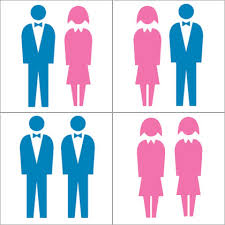 I realize that in writing this I’m holing myself up quite solidly in my ivory tower, but I’m prepared to deal with that. This is, after all, my damn blog.

I’ve been waiting around to hear some responses to the new bisexual men study from Northwestern University before talking about it here because I find the news that–shock!–there might actually be men who are attracted to both sexes out there not particularly amazing. And I find it totally head-shake-worthy that scientists are just now getting around to taking a more legit look at the topic. So the whole thing left me kind of happy but annoyed at the same time. Like, “Really, guys? That’s the best you can do in 2011?”

I guess it’s a good thing that the subject is getting a good look, I’m reserving excitement over it. The discussion has been solidly centered, so far, around the term bisexual. Which is fine. There are lots of peeps out there who are totally bisexual, and like guys and girls as such, and awesome! Rad! But despite the numerous references to the Kinsey scale in most of the articles I’ve read about this study, lots of people are overlooked when you restrict the conversation to “bisexual.” Especially for men in our mixed-up nation in which the gay/straight binary is hugely problematic if you wish to get into the far-more-seductive gray area, “bisexual” presents sexuality as a simple equation. Man + woman = straight. Man + man/woman = bisexual. Man + man = gay. But how boring is that? How unrevealing? Can’t we go farther?

The study in question selected for men who self-identified as gay, straight, and bisexual, which is a bit limited to my way of thinking. From a scientific method standpoint I recognize that setting up control groups and measurable criteria for a study of fluid sexuality and gender expression and so on might not be the easiest thing to do. Science does, after all, like things to be easily quantifiable, and as the ongoing struggle for a definition for the term “queer” proves, taking sexuality at face value and giving it the dignity of an ability to fluctuate is a very difficult thing to grasp hold of linguistically, socially, and definition-wise. But this study looked at, according to Slate, “erectile arousal while watching videos of male and female same-sex intimacy” in men. The “bisexual” ones had to prove “sexual experiences with at least two people of each sex, in addition to a “a romantic relationship lasting at least three months with a person of each sex.” Sure, easy to quantify and study. Got that part…

But what about men who identify as queer, who have had relationships with trans people or genderqueer people who identify as neither? Do their partners not count? Are bisexual people, now that they exist (at least the men do–god knows what the scientific community will do with the idea of female sexuality; the existing track record is not oh-so-impressive), limited to identification only if they have been fortunate enough to find understanding partners of typically recognized genders and had sex with them? What about people who have trouble finding dates because they’re “bi” and that can be tough to negotiate with a new partner? Are those people not bisexual?

It’s not that I have answers to any of these questions, or that I think I have some solution to the gender binary assumption the study is imposing on its subjects. It’s not that I know how to study these things less black-and-white-ly. But I feel it’s important to vent my frustrations about a study that is ostensibly cracking open a door of legitimacy for a part of the population that has rarely seen the light of recognition before, yet which is imposing the same kind of biased, problematic thinking that forces these people into the dark locked closet in the first place. It’s maybe a half step forward, I guess, after digging down deeper into the already-well-traveled path.

…anyway, anybody recognize that little quote I used for the title?

0 thoughts on ““But what about those who swing both ways? AC/DCs?””