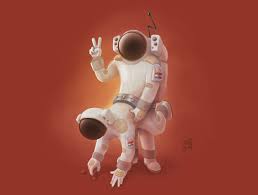 …you’ll have to keep wondering. According to the Russian expert Valery Bogomolov, “There is no official or unofficial evidence that there were instances of sexual intercourse or the carrying out of sexual experiments in space.” Well, poo. That takes all the fun out of my long list of Kosmonaut sex jokes. Or something. However, if you want more in the way of speculation on zero-g gratification might work out, I’ll refer you to the capable hands of professional asking-weird-questions journalist, Mary Roach, whose book Packing For Mars not only examines the logistics of sex in space but also spends some serious time trying to track down anyone who’s ever given it a try (unsuccessfully, alas; I think Bogomolov is right). It will also possibly split your sides open. When I first read this book, specifically the chapter on space doodie, I spent a good half hour alone in my bed at 2:00 am laughing hysterically with tears streaming down my face… sober.

In other news that’s not nearly as much fun to think about, a bill that would ban any discussion of homosexuality in public school classrooms has just passed committee in the Tennessee Senate and will go to a full Senate vote soon. Really. Unofficially dubbed the “don’t-say-gay” bill, the legislation would make it illegal for educators in Tennessee to make any mention of non-heterosexuality in their classrooms before ninth grade. Because there’s already a law in place in that state that forbids any sexual education that doesn’t fit into their “family life” curriculum to be taught, however, this seems entirely unnecessary. I doubt that “safer anal sex between males” falls under the auspices of family life. Just going out on a limb here.
Of course, I understand that most people don’t exactly relish the thought of getting up in front of a classroom of twelve-year-olds and talking about safer sex practices, but… Tell me if I’m wrong here, because I was a particularly horny child and may not have had a representative experience, but… does ninth grade, when students are 13-15 years old, seem a little late to bring up these topics in today’s world to anyone else? Tennessee may be in the South, but I don’t think that “Southern” and “conservative” necessarily preclude “horny pre-teen experimentation” or “transmission of STDs” or the like. If kids are going to be experimenting–and they are–before their “family life classes” kick in, or even after they kick and kids are still left in the dark about how to have safer sex in homo- or heterosexual relationships, then how are we going to help them not get diseases and babies? …oh, wait? We’re not? Oh, right, well, whew, at least Planned Parenthood will still be around to educate and provide healthcare… oh, right. Well. Um.
So then what’s the point of this bill? To keep kids in the dark about basic facts of life so they… will… make bad decisions based on ignorance? It… kinda seems that way.
I guess it’s tough shit for queer kids in Tennessee. Then again, according to the basic level of logical thinking going on here, I think it’s safe to assume that the brains behind this bill, Sen. Stacey Campfield, might hold onto the notion that if you just don’t tell a queer kid what queer is, he/she won’t end up being queer in the long run. Which is water-tight reasoning, obviously. How can you be something if nobody tells you it exists? I mean, it’s not like humans are prone to individualism or innovation, particularly not the gay ones… Oh. Wait.

If you want to feel better about the world, like I do, I recommend Packing for Mars. Or, for more instantaneous gratification, check out Fleshbot’s reprints of Edita Vilkeviciute’s beautiful, spring-y, flower-y photo set. Breasts like that can make you forget your worries, at least until you realize your a girl and you find them lovely and you don’t know how to get any information on what’s going on with  your sexuality before your 15… Blehhh…