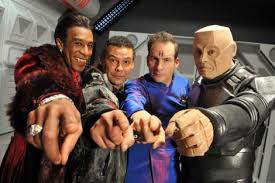 Are your panties wet? Mine are.

Well, readers, I’m very happy to report that my day-late contribution to Global Orgasm for Peace Day was a doozie. I may have come to the party late, but when I came, I came, again and again. So I feel like not chipping in on the big day was ok in the end, because I provided the world with a plethora of orgasms the day after to make up for it. Of course, I’m not sure if I came through on the whole “concentrating on peace” during said orgasms. I may have instead been thinking about various incredibly dirty things I’d have liked to do on the set of Red Dwarf. Yes, Red Dwarf, the weird 80’s-tastic British comedy. And no, not because I’m attracted to a single member of the cast, cause I’m not. Rather, because Red Dwarf was playing in the background when my man and I got down to business and I kept getting glimpses of the set when I opened my eyes, and suddenly I thought, “How fucking awesomely fun would it be to go onto a television set and have sex ALL over the place after hours?” For some odd reason, this struck me as a particularly sexy thought–maybe because my lover’s face was planted firmly between my legs at that point–and the orgasms just started parading through my body at that point, as I let a series of different positions I could assume parade through my brain… on the control panels in the Drive Room, on Lister’s cool little motorbike thing, in the small movie theater, in the testing room (Holly’s unsmiling face on the monitor be damned) and so on.

So, while I may not have been focusing so much on world peace, I think the amount of positive feelings and pleasure I released into the quantum energy field, particularly the geektastic British comedy quantum energy field, or whatever, was quite sufficient to make everyone’s day just a tad better. It made mine WAY better. I’ll try again today, with less geeky Britcom and more peace, to improve the world’s vibes, but if it turns out that BlackAdder is playing in the background this time, well… I guess Rowan Atkinson’s day will be fantastic.

Anyway, that was a good beginning to a very merry few-days-of-Christmas in my apartment, and today I’m still going strong with a holiday bottle of Macallan, some chocolates from the boy, and some ponderings I’ve started on my next Sexpert column! I believe that by the let-down after Christmas I’ll have a new Dr. Lags segment up and running for you to be amazed at.

Oh well! In the meantime, I’m working on a few articles and reviews for Madison Young’s TheWomansPOV.com, WHACK! Magazine, and some new reviews for this very blog, due out next week sometime. The following week will be difficult for blogging, but I assume also for reading, since everyone will be driven mad by family get-togethers, meals, and drinking, but hey, that’s why they call it “merry,” right?