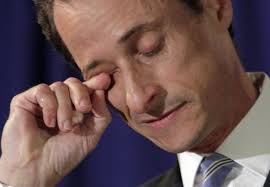 I don’t like people talking shit about Anthony Weiner. It is so fucking annoying.  Such short memories people have. The real disgrace is with the American people, not him. Some of my friends have tweeted that he’s an asshole, and my first instinct was to unfollow them. I’m very defensive when it comes to Anthony Weiner. I think he’s great. And his story just brought to the surface some things that people are jealous of, maybe. Stories about “cheating” bring out the self-righteousness in everyone, which is gross. Disgusting, one-sided, blind by choice, closed-minded, easy condemnation of another human being sure does rally people together! No matter who it is, as long as we incriminate his sex life.

How does this really affect his job? Maybe it made him better at it. Sex gives you confidence. It’s healthy for the self-esteem, which is indispensable for public office. In fact, I think his scandal makes him a cooler person. I always presumed he had a lot of testosterone, because it was clear that he was aggressive. He is the only truly passionate Democrat in the congress. When he shouted on a podium about how the giant insurance companies were to blame for broken system of healthcare in this country, it was completely sexy. No wonder. He has a lot of intensity. And wow, yes, sexual desires.

Duh. People need sex. Men really need sex. What is the big fucking problem with that? It is absolutely stupid how most people are judging him, taking him down because of morals. Morality is dumb. It’s an archaic policy that should start being ignored now. These dumb morals that everyone hypocritically and unfairly stand, took the best talent out of the government.

I don’t care that Anthony Weiner cheated on his wife. That is their business. She’s the one who married him, not the American people. He was doing a great job, fighting for universal healthcare, and standing up to gross Republicans. Now it’s all fucked.Is it because there are photos of his dick on the web? That makes me so sad and disappointed that we live in a society that oppresses sex so much.

I wish that sex scandals were just left in the interesting gossip category. Slap a couple pictures in US Weekly and be done with it. Smart people shouldn’t be threatened by a person’s sex life. The elected officials are allowed to have sex, cheat, buy hookers, vacation with rent-boys, and sext the same as everyone else. We really need to get honest about ourselves. Sex is good. Don’t knock other people, or make them feel shameful anymore! It’s just cruel and pointless.

oriana small is a writer and visual artist from Southern California. As Ashley Blue, she appeared in over 300 adult films — including the infamous Girlvert series (JM Productions) — directed seventeen adult film features, co-hosted Playboy TV ‘s Night Calls Hotline, and has won numerous adult film industry awards, including AVN’s Female Performer of the Year in 2004 and Best Supporting Actress in 2005. She lives and works with her husband, photographer Dave Naz, and her cat and dog in the Hollywood Hills.