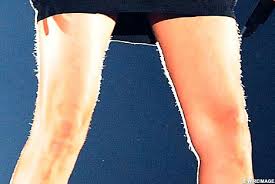 Hello darlings. The news is making me too upset to coherently talk about what I think these days. I have a lot to say but it’s all to jumbled and angry right now to be written down. So, while I’m bubbling and boiling and trying to get to a point of coherent argument… I would like to make an announcement.
About a month ago, I stopped shaving my legs. I’ve been shaving them, and my pits, and depending on my sexual activity level, my nether regions, since sometime in early high school. And this winter I suddenly realized, after having gotten lazy for about a week, that you can’t see my damn leg hair. I’m a sweaty, stinky, hairy Celtic/northern European mix, but I got lucky in the leg hair department. The follicles down there put forth light, almost clear, downy hairs that can only be seen if you’re really looking for them, or if I’m standing in front of a dark background with backlighting. Then they look like they have halos, as the above picture illustrates (no, that’s not me; I stole that from DailyMail.uk). But aside from that, they’re almost imperceptible; I had to inform both my boyfriend and my girlfriend that they were there. And they’re almost an inch long at this point!
I just wanted to let everyone know that. Because, honestly, it’s kind of awesome to have leg hair. Not only do I feel somewhat more macho, but I feel very empowered. Kind of like: nobody can make me do this if I don’t want to. And even kind of sneaky–if I didn’t announce it, nobody would even know I was going against a societal norm. I’m very subversive over here.
And the coolest thing? If I don’t have any leg garments on, I can feel the breeze in my leg hair when I turn around! The hairs are so downy they kind of blow around in the wind. And if I’m wearing baggy pants I can feel them moving against the material. It makes me feral, like a cat with bushy whiskers. And really, I guess that’s what body hair’s all about. It doesn’t really keep us warmer, but it can serve as a very late warning system if something weird is going on nearby. I’m digging it.
Lag out.