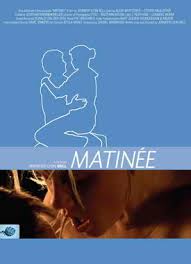 “Matinee” shows us an afternoon in the life of a struggling play in a small theater. The lead actress, who’s just taken over for another, more famous woman, and the lead actor, a popular Scottish soap opera star making his stage debut, are worried about their onstage chemistry. They just can’t seem to get the sexy bits right. He suggests they break routine and try some new blocking since the director’s gone that afternoon anyway. She resists, apparently terrified of going too far in front of press and a big talent agent who will be in attendance that afternoon. The tension, as she waits to start the big scene, is powerfully present. And…

Ok, you know from the moment their eyes meet on the stage that she’s planning to have sex with him. If you haven’t figured that out by the time it happens, sorry for the spoiler, but c’mon, it’s right there. She took a condom out of her bag and put it in her pocket before she went onstage, so you’re likely to have figured this out. But what you can’t have figured out, until you watch this scene, is how different it will be from the sex you expect these two people to have.

The scene between them is fraught, difficult, strained, and absolutely heart-breakingly tense, while managing to be beautiful and revelatory, all at once. While the audience looks on, uncertain about what to make of the events unfolding, the two actors on stage approach each other with no idea what is about to happen: she knows she’s going to try to have sex with him in front of a live audience, but he only knows that something has changed in her demeanor, and he’s trying to go along with it. As clothing is dropped and pleasure is approached, they go through the hesitant, jerky motions of first-time lovers. They are confused and awkward and utterly self-conscious in front of the audience that they can’t forget is there. But their fumbling is raw, unplanned, and real. Sitting at home I was caught between an inability to look away, getting horny, and cringing “Ooooh god it’s so awkward” discomfort. And I was hooked.

It’s been a while since I’ve watched a sex scene and gotten SO into it. Whereas usually the sex is the whole point, in this film it’s the catalyst for a connection between the actors themselves and the audience they’re playing to. There is so much more going on than two people being intimate that the viewer doesn’t know what to make of it, but can’t help but sympathize and, well, get a little moist, too. The interplay between their desire to transform their on-stage chemistry, their awareness of the huge risk they are taking, their inability to escape the audience’s gaze and their simultaneous need for it, their unfamiliarity with each other’s bodies, the slowly developing connection between them, and the incredibly meta structure of the whole film as a performance is simply…

Well, there. I wish I had more elegant words to describe how I feel about “Matinee,” but I really can’t do it justice. Just get a copy. I promise you won’t be sorry.